DeFi Is Taking Over Crypto: Sign Of Another Bull Run, Or A Flash In The Pan?

DeFi Is Taking Over Crypto: Sign Of Another Bull Run, Or A Flash In The Pan?

DeFi may offer real and predictable results, but only if you’re knowledgeable enough to avoid the traps.

As with all things related to blockchain-powered technologies and products, they are followed by an intense burst of growth and enthusiasm. Bitcoin (BTC) spurred a massive generation of altcoins (over 2500), each struggling to repeat the success of the original crypto king. Eventually, most of them received the ignoble status as “sh*tcoins”, while Bitcoin remains the dominant force in the cryptocurrency space with a market cap of $226 billion.

Likewise, the ICO craze (Initial Coin Offering), as an attempt to quickly fund crypto-related projects, took off enormously. In its peak year, 2017, hundreds of ICOs managed to raise $5.6 billion. However, in terms of return on investment (RoI), only half a dozen could be deemed as truly successful, such as IOTA, NXT, Stratis, Neo, and Spectrecoin. Altogether, ICOs became almost synonymous with sleazy dealings, as 80% of all ICOs turned out to be fraudulent in some way.

You see, when it comes down to the realm of blockchain-derived products and services, the barrier to entry is fairly low due to the digital nature of it. Only a few components are required:

While access to computers and the internet is commonplace throughout developed nations, technical knowledge isn’t. Yet it’s growing — there are now nearly 3 million jobs in data, meaning an increased percentage of the population has sophisticated technical skills.

This is the double-edged sword of the crypto-sector. While some actors are genuinely pushing themselves for ideological reasons of democratization and decentralization, it is much easier for many more actors to pile onto something to make a quick buck. However, this is not necessarily a bad thing.

Although an average user might become weary of the whole crypto-space, these initial birthing pains are in some way necessary for new technologies to become robust. And believe it or not, this is happening to a certain degree.

For example, automated payment software is already pushing to accept Bitcoin payments for goods and services. Generally speaking however, user experience in the digital asset realm is lacking — forcing many holders to be, well, holders. From this perspective, we should view DeFi, decentralized finance, with its yield farming and governance tokens.

What Does DeFi Offer?

Veterans of the crypto-space are rightfully viewing DeFi as the final realization of the original spirit that gave birth to Bitcoin. This is the spirit of financial freedom, in this case fortified by cryptography, so that no central authority, governmental or otherwise, could impede in a borderless flow of money. And once you have that financial freedom, freedom of thought and expression comes with it.

DeFi is a natural attachment to cryptocurrency, as the first outgrowth of this philosophy. While cryptocurrency provides the means, DeFi attempts to reconstruct all the financial instruments you would find in a traditional bank, such as borrowing and lending, thanks to smart contracts.

Bitcoin is seeing increased accessibility as it is now available through the majority of popular stock trading apps. Yet the key distinction with DeFi is that these financial instruments would operate within a decentralized space independent of governmental or corporate mediators.

This means nothing less than a revolution in the democratization of financing, as you would only need access to the internet to benefit from loans on either side of the equation. Lex Sokolin, the chief marketing officer at ConsenSys, succinctly framed DeFi as such:

“[DeFi is] literally a platform shift in how financial products are manufactured. Full stop. End of story.”

It is no wonder then that the DeFi space experienced remarkable growth within a single year. Just over three months ago, DeFi reached a milestone of $1 billion locked assets.

Today, that figure spilled over $6 billion worth of assets, largely locked in yield farming of interest rates. Even if we take the most conservative estimate of $3.5 billion, which accounts for the top DeFi protocols, this seems to be only the beginning of the expansion.

As you can see, DeFi follows the natural progression of things:

It is important to take note of this, as to not simply dismiss DeFi as another bubble such as the ICO craze, which itself bore fruit. With that said, there is some bubbling to be watchful about. The best example of these hyper-valuations in the DeFi space comes in the form of governance tokens.

Compound, as among the first DeFi loan platforms, issued its own token called COMP, in order to attract users to the platform. Within a week of its launch, COMP accrued 300% of its value, peaking at $372 in August. Inevitably, its price halved at around $183 at the time of this writing. Similar to how Bitcoin’s price affects all other altcoins, so did COMP have a large impact on the DeFi space.

Some professionals in the field, like John Wagster, the head of Frost Brown Todd, have no compunction in portraying even that halved price as hyper-valued, instead proposing a price at $50. Moreover, Compound’s focus on USD loans has exerted pressure on competitive platforms, such as DAI. They rely on stablecoins, which enhances their difficulty of maintaining a tether to a real world asset.

The mark of a bubble is its over-valuation, and DeFi certainly has some over-valuation issues. However, how serious of a problem does this represent? After all, in the current DeFi stage, where only 1% of cryptocurrency users are active DeFi participants, one should make a distinction between birthing pains and crippling unsustainability.

Fortunately, the price-to-earnings (P/E) ratio gives us an overall picture of the state of affairs in the DeFi space. As you would infer, the P/E ratio is the dollar count one has to put forward to gain one dollar from the company’s earnings.

When we take a look at the top DeFi platforms/protocols, only some of them exceed valuations. 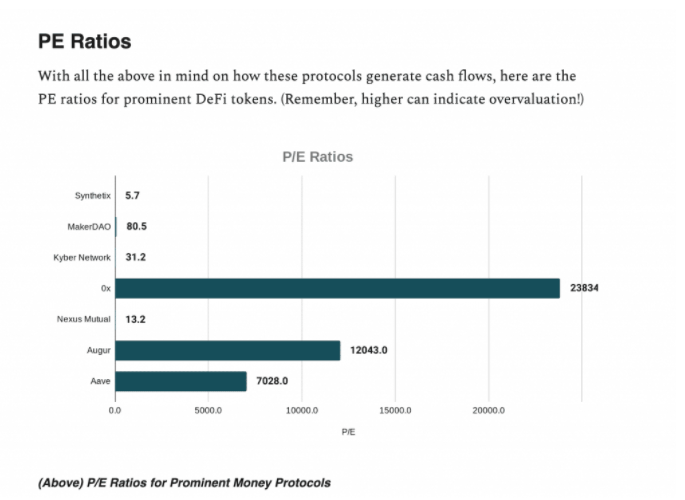 In order to align themselves with reality, these three off-chart DeFi projects should either gather more users or economically reconfigure their tokens. Either way, the DeFi space shows an organic growth from genuine enthusiasm. People locked out of banks can now access loans, and people who have digital assets sitting around can now employ them to gain passive income via yield farming.

So far, as the low user count shows us, DeFi is still in the incipient stage.

Even so, it managed to gather billions of dollars in less than a year. Again, Lex Sokolin of ConsenSys puts it best as to why DeFi burst into the scene with such force:

“And we’ve had this magical moment over the last six months where you have, essentially, these programmable vending machines of loans, of margin trading, of book building and market making; of insurance: all of these things being turned on and integrated, and starting to create some really bizarre and interesting outcomes.”

When we zoom out, this was inevitable. Software-as-a-Service (SaaS) has been trending for a while, eventually supplanting old ways of doing things, including video games (GaaS). This tells us that ecosystems of the future are converging toward a space in which dynamic, adaptable services offer the optimal framework for catering to people’s needs.

Moreover, the major force that contributed to DeFi’s growth will remain – low-interest rates from the world’s central banks. Escape from this reality, in the form of rewards that are more real and predictable than stock fluctuations, is anticipated to bring in more users and contribute to the maturation of the DeFi space.

© 2020 Benzinga.com. Benzinga does not provide investment advice. All rights reserved.